Tidewater memory:
I remember learning Spanish with Ms. Cecilia, and I remember sitting in an oval with everyone during Kindergarten with Ms. Suzanne and Ms. Jan, and 'traveling around the world'. I also remember performing a 'musical' where we painted the planets and sang about them with the music teacher. The song still gets stuck in my head sometimes...

What I liked most about/life lesson I learned from the school:
I learned how to love learning. Tidewater is the reason I've been so successful up to this point. It helped foster my intrinsic motivation and individuality, while also teaching me how to work in a group and encourage others.

Some interesting facts about me:
I plan on getting a masters in renewable energy next year. I just traveled to Nicaragua for a service trip and I'll be visiting Poland and Lithuania with my best friend in June. I will be graduating in May 2016 from Cornell University with a BS in Materials Science and Engineering.
Name: Caylyn Keller 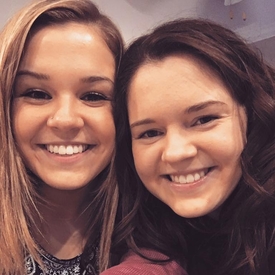 Caylyn is a graduate of Huntingtown High School and now attends Ithaca College where she is studying Communications Management and Design. She has plans to study in London soon and is a member of the American Marketing Association where she is honing her market research skills.
Name: Kasey Gillikin 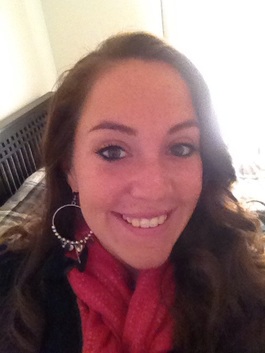 Kasey received her degree in Elementary Education from Salisbury University and now teaches in the Anne Arundel county public schools and is proud of her Tidewater education.
Name: Christopher Kelly 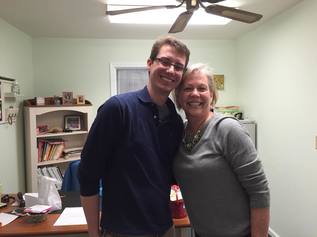 Christopher Kelly is working out of Madison, WI with the Brucker Corporation (of Germany) which develops high-performance scientific instruments and analytical and diagnostic solutions to explore life and materials at a molecular level. He began this job about a year ago and has traveled extensively around the US and to Germany. Having taken some time to work on a major political campaign the year before, he caught the political bug and may be interested in running for office! 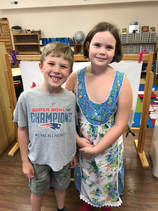 We were so happy to have a visit from Karl Lapointe and his mother Kathy recently and are glad to know that he is thriving at his new Montessori school in Massachusetts!

Sam Rodilosso became a student at the Key School in Annapolis this year and is on the middle school sailing team. Sam spent time at Brown University last summer at their STEM pre-college program.”The classes I took, Introduction to Human Anatomy, and Marine Biology, were awesome. I loved dissecting a heart and eye. I also loved being out on the bay examining marine life. And I met so many smart, fun people from around the world that I now call my friends. Here's a fun fact: the dorm room I stayed in was once actress Emma Watson's room while she attended Brown! Brown University is now on my list of top 3 college choices.” 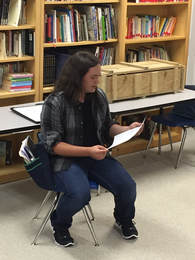 Logan Bossert is a sophomore at Huntingtown High School. He was recruited to be a member of the Marching Hurricane drum line as an eighth grader.  After hundreds of hours of practicing, performing and competing, the band is headed to Hershey, PA in mid-November to capture what they hope will be their first Atlantic Coast Championship.  The Canes have won their chapter’s championship nine times.  Logan’s team project “Battle of Stalingrad” was awarded 2nd place at the state level of the Maryland History Fair 2017 exploring the theme “Taking a Stand in History. He came to our Elementary class and shared the step-by-step process of historical research, writing a paper, presenting it, gathering artifacts, and the final exhibition.

Chase Skrubis is a 2017 graduate of Granby Memorial High School, CT and is attending Penn State this fall.  As a young child, Chase pursued the game of golf with this father and that interest evolved into a project of refurbishing golf clubs. Since forming the non-profit charity Klubs for Kids in 2010 in the basement of the family home, Chase has donated clubs to 90 children, helped pay for lessons, and started a scholarship at Granby Memorial High School for kids interested in business. 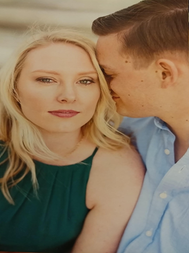 Hannah Kelly, daughter of former Board member JoEllen Kelly and her husband Gordon, works for the Department of Homeland Security and is engaged to be married to Nick Orban in May 2018. She has worked for the Department of Homeland Security since her junior year at the University of Maryland and is in the Division of Customs and Border Protection. Hannah and her husband-to-be are avid Washington Nationals fan and interestingly, both Nick and Hannah are twins with birthdays only a few days apart!

Robert Frederick is in his senior year of high school at St. Charles and is in the midst of applying to colleges.  He is planning to study mechanical engineering and currently participates in MESA (Math Engineering Science Achievement), robotics club, and a quiz team. Robert writes: “Last summer, I went on a long road trip up north to New England and Canada. I checked out a bunch of colleges, but also explored the towns and cities around them. The summer before that, though, was the coolest one ever. I went on a 3-week bike trip around Nova Scotia, Canada (Canada again!). I had lots of fun camping and riding around the island. I made lots of friends, but even more memories. I learned to appreciate the environment while at Tidewater, and I now volunteer often at the American Chestnut Land Trust.”

Alexis Balinski works at Mote Marine Laboratory & Aquarium in Sarasota, Florida. She does exhibit design for the public aquarium. It is the dream job she aimed for in college, where she studied both graphic design and marine science.

"The education I received at Tidewater instilled a love of learning that allowed me to thrive in school, which in turn gave me the foundation I needed to pursue the passions that landed me where I am today. Some of my favorite memories of Tidewater include the independent projects we were encouraged to pursue — I especially remember the 11-foot tiger I spent a month painting after reading about the species' max length in a textbook. Thank you, and the rest of the caring staff at Tidewater, for showing me that that school and learning can be fun!"

Emma Rader started her freshman year at Virginia Tech, studying Animal and Poultry Science (APSC), with her sights set currently on Veterinary School. She loves working and connecting with animals during the weekly APSC Labs in her first semester - cattle, swine, goats, you name it - but she really took charge when they learned the art of "sheep flipping." Choosing one of the larger ones from the pen, she had her sheep calmly resting on his haunches in no time...no doubt drawing on her 2 years of experience raising 4-H market lambs here at Tidewater! Other than college life, she remains active in her church/mission work and hopes to be selected as a leader with the Appalachia Service Project mission for Summer 2018, a group she has volunteered with during the past 5 years.

Sophia Amin is a sophomore at Loyola University, Maryland where she is studying biology. She was one of only 20 students selected this year for Health Outreach Baltimore, a student-led volunteer program at Mercy Hospital. She serves as a student advocate, helping patients in the Mother and Baby unit and connecting those patients to community services. Sophia hopes to apply to professional school in a health-related field upon graduation. Last summer she worked at Southern Maryland Oral and Maxillofacial surgery with former Tidewater parents Dr. Paul Schwartz and Dr. Clay Kim.

Jonah Amin is a junior at Indian Creek School in Annapolis where he served as a senior counselor for the school’s STARS program last summer. This transformational camp serves disadvantaged minority youth from fourth through eighth grades. The program helps to prepare campers for the rigors of high school courses like Advanced Placement and IB. Jonah has played varsity lacrosse for Indian Creek since 9th grade, including at the school’s division championship appearance at Johns Hopkins last spring. 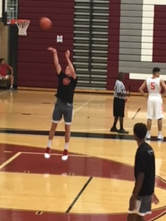 High school junior Charlie Weber is attending Bishop O’Connell H.S. in Arlington, Va to get more exposure to college basketball coaches and receive instruction from Coach Joe Wootten. Here is a picture of Charlie playing in an AUU tournament in Las Vegas this past July.

Bailey is currently in London on a Marshall Scholarship pursuing her Master's Degree in Islamic Law. She is still running her non-profit Paper Airplanes (paper-airplanes.org), where American and Turkish students tutor refugees who have been displaced from their schooling. She is also working on a political campaign for a Maryland governor hopeful. Bailey completed her Fulbright Teaching Fellowship in Turkey, where she taught English to young people, and her energy is endless...just as when she was at Tidewater!
Marta is living in Venice Beach, California working for a composer who writes for movies and documentaries. She is working on presenting her empowering story of holistic healing to high schools nationwide. In her spare time, she surfs, hikes, cycles, and competes in triathlons. She says California is home, despite our pleas to come back East!

Liam is a freshman at Florida Institute of Technology, where he is studying aviation This past summer he interned at PN Hoffman's departments of finance and marketing in D.C. He really enjoyed his time there and hopes to return to learn even more next summer. 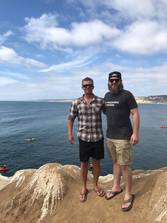 We were very pleased to receive this photo of alumni Will Jones and Andrew Novak who met up in California recently, proving that Tidewater friendships last a lifetime. 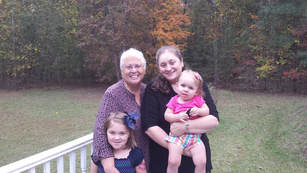 We reached out to our founder Nancy Libertini for an update on her daughter Katie Bolyard, a member of the first Tidewater class. “Katie is the most beautiful and loving mother of two precious little girls:  Bethany, age 7, in first grade, and Naomi, age 15 months.”  Katie and her husband Jim, a Methodist pastor, live in North Carolina where Jim recently finished his program at the Duke School of Divinity.

Nancy’s daughter Jessica Libertini, whose own Montessori experience as a child prompted Nancy to found the school,  is on sabbatical from Virginia Military Institute where she is a math professor.  Jessica is currently serving as a Presidential Fellowship Award Recipient at the Defense Department where she is studying and facilitating greater cultural understanding between our military and foreign countries.  She examines ways in which the U.S. military might assist with disaster relief, educational support from our troops, etc.  “She has a real heart for people and is determined to be a peacemaker in this world.”